The Legendary Danube With 2 Nights In Prague With Jewish Heritage 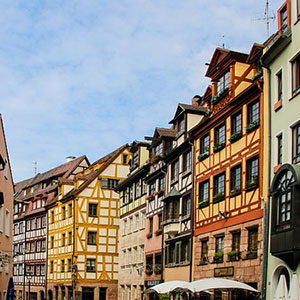 What entices you most about a river cruise through Central Europe? Does visiting historical sites pique your interest? How about architecture preserved from the 14th century or cities virtually untouched since Roman times? Maybe it’s walking down narrow cobblestone streets lined with beautiful Patrician houses or enjoying Germany’s famous beers? From Prague to vibrant Budapest, this Danube river cruise vacation takes you to four countries. And the scenic beauty along the way as you cruise past quaint towns can be experienced right from your stateroom or while sipping wine atop the Sky Deck of your ship. During your cruise, experts will join us to introduce you to the Jewish culture and its remarkable history in Europe. Enjoy two nights in Prague, one of Europe’s most beautiful cities. Here, plenty of activities are waiting for you: a guided sightseeing which will show you the must-see sights, a visit to Terezin Concentration Camp and a Jewish Heritage tour through the fascinating Jewish Quarter. Stand in front of Old Town’s medieval Astronomical Clock, which amazes as an intricate art piece and visualization of time unlike anything else in the world. Travel to Nuremberg, Germany, to board your river cruise vessel docked on the Main Danube Canal and visit this thousand-year-old city with a Local Guide. Next, reach Regensburg, the only German city not bombed during WWII, where you will follow the traces of its Jewish history from the middle ages. Lovers of architecture will enjoy the many listed buildings of historic interest, and Porta Pretoria, gates to an ancient Roman fort built in 179 AD. Passau, known for its narrow, winding streets, offers the magnificent Italian baroque St. Stephen’s Cathedral. In Melk, you will visit Austria’s majestic Benedictine Abbey, one of Europe’s largest monasteries, which sits high on a bluff. Take in the breathtaking views before continuing through the picturesque Wachau Valley to the romantic sounds of Vienna, the “City of Music.” Join a guided city tour and discover the Jewish life in the last century. Your European river cruise vacation ends in Budapest, the capital of Hungary, with guided sightseeing and a tour focused on the Jewish Heritage of the city. You will also have some free time to explore this vibrant city on your own.

Human settlements have existed here at the confluence of the Danube, Inn and Ilz rivers ever since prehistoric times. In this millennium the city was considerably enlarged by the prince bishops of Passau, who made it their royal residence and capital of the largest Danube diocese. The wonderful Baroque buildings that dominate the city today were built after the great fire of 1662. One of the most striking is cathedral of St. Stephan, which boasts the world’s biggest church organ. One of the best ways to enjoy the magic of Passau is with a sightseeing tour by ship.

A perfect combination: an inviting skyline, impressive historic monuments, and legendary hospitality. Regensburg, Germany’s best preserved large medieval city, offers a harmonious scenario in every respect. Here, the heritage of major past eras is the spice in the soup of lively urban life.

Get a feeling for life in the days of old – by walking over the Stone Bridge, built over 850 years ago and the oldest of its kind in Germany. Or stroll through the Old Town lanes with their tall patricians’ towers; pass through the Roman Porta Praetoria at the Northern perimeter; and visit the Old Town Hall with historic imperial hall and the palace of the princes of Thurn & Taxis. Or take the time to listen to an uplifting choir concert in St. Peter’s Cathedral – Bavaria’s most outstanding Gothic structure.

Ride the boat across the Danube rapids, enjoy some of the many festivals, experience art and culture at historic sites, and treat yourself to Regensburg fried sausage at the historic Salzstadel.

Prices are per person, land or cruise only, based on double occupancy. Offer subject to availability and change without notice. Some restrictions may apply. Please ask us for details.

Charges not included in the land vacation price: airfare to and from the start of your vacation; airline baggage fees including checked and/or excess baggage fees; Federal inspection fees for the Federal U.S. Customs and Immigrations; agricultural tax; other per person taxes imposed by government entities; applicable cruise taxes, fees, fares and port charges; passports; visas and vaccinations; transfers; tips to your Tour or Cruise Director, Local Host, driver, Local Guides, and/or ships’ crew; gratuities on ferries, trains, and cruise ships; laundry; telephone; minibar; alcohol, beverages, and food outside of the contracted menu as presented at a hotel or restaurant (these extra items will be billed to you before leaving the hotel, ship, or restaurant); additional excursions and activities not listed as ‘included’ in the itinerary; porterage at airports or train stations; Travel Protection premiums; and all other items of a personal nature.

Request A Quote Send To A Friend Have A Question? Contact Us

Send To A Friend

Please don't close or refresh the page while we are processing your submission
Please be patient, this could take a few minutes.